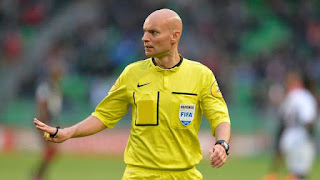 In the 90' minute of the game, during a counterattack, he was slightly pushed from behind by a player from Nantes, Diego Carlos. He fell down and then, he had a reaction against the player from home-team, trying to hit him with what we could call a more than clear "reckless tackle" (or even more than that...).
Here the video of the incident:

After that, he decided to issue a YC (it was the second one) and the consequent RC to the player.
If he was convinced that the player from Nantes had pushed him deliberately, the only decision to be taken was a straight RC for violent conduct against match officials. In any case, the decision to assign a direct free kick to PSG was a right one, according to some recent changes of LotG: 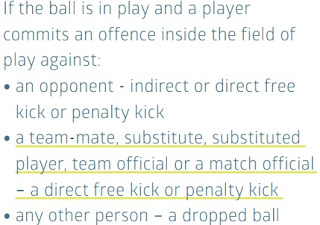 The behavior of the French referee caused big astonishment in the football community all over the world. It is indeed very rare to see a referee having a reaction and trying to hit a player.
In my opinion this is an unacceptable conduct from a referee at high level, but of course that would be unacceptable all over the world and in all the competitions, tournaments and even amateur games.
The first lesson we can learn from this incident is surely the following: the importance of keeping always a "cool head" when we are on the pitch as referees. We must isolate ourselves from the context, we must be focused on the game itself, being mentally ready to everything, having an appropriate approach with players, but without feeling this kind of tension while managing players, as it very likely happened for Chapron.  The overall picture of a referee must inspire confidence in those who look at it.
Tony Chapron has been a FIFA referee until the last December, when he was replaced on the international list. He reached Champions League group stage, officiating 5 games in this phase of the competition, in 2010, 2011 and 2012.  He also attended a FIFA tournament: U17 World Cup in Mexico in 2011, with two group stage games. Surely, a referee with a more than big experience, and also for this reason this incident was absolutely unexpected. Very likely, we could dare to say this was the final act of his career.
Posted by Chefren at 16:56