Viktor Kassai has decided to retire

Hungarian UEFA Elite referee has released some statements to the official site of Hungarian football federation. 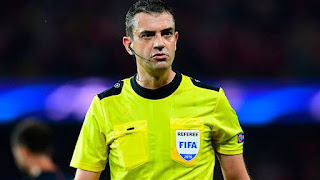 "I'm ending a thirty-year career as referee to face new challenges. I want to thank everyone inside the federation,  the heads of refereeing and the colleagues who have helped me in this period, because without them I would not have been successful in my career. I have spent more than twenty years on the Hungarian football and in international matches, I already got so much about everything I could ask for. This has been a so long time. I have decided to start a new era in my life. I don't want to get away from football, lately I have trained in sport management and I hope to be successful in this field too."


Source:
https://jatekvezetes.mlsz.hu/hir/uj-kihivasokra-koncentral-a-jatekvezetokent-visszavonulo-kassai-viktor
Posted by Chefren at 18:09