Germany's Riem Hussein has been appointed as the referee for the UEFA Women's CL final between Chelsea FC Women and FC Barcelona Femení. 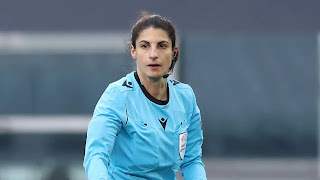 The UEFA Referees Committee has announced that German official Riem Hussein will take charge of the 2021 UEFA Women's Champions League final between Chelsea and Barcelona.
The 40-year-old has been an international referee since 2009 and was fourth official for the 2017 decider between Lyon and Paris Saint-Germain in Cardiff. She was on the refereeing team at the 2019 FIFA Women's World Cup and UEFA Women's EURO 2017.
The 2021 takes place at Gamla Ullevi in Gothenburg, Sweden, on Sunday 16 May at 21:00 CET.
2021 UEFA Women's Champions League final refereeing team