The Serbian will be in charge of Real Madrid - Liverpool on next 26 May in Kyiv. Our blog readers had not many doubts about that. Let's have a closer look at his international career. 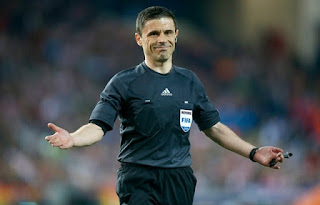 Milorad Mažić joined the FIFA list as international referee on 01/01/2009, a few months before his 36th birthday. He made his debut in Europa League group stage on September 2010 and a few months later he got also the appointment for a KO-stage game. This was the first remarkable achievement. Then, in the 2011-12 edition, he officiated 8 games: starting from preliminary rounds, he appeared in play off, group stage and also three KO-stage matches. In this period he was showing more than impressive performances. I had the occasion to watch one of these games: FC Vaslui - SS Lazio, Europa League group stage (01/12/2011). The game by itself was not so challenging, but I had the feeling that he had a more than natural charisma on the players, and if everything was going in the right way, it was just thank to his presence.

Debut in Champions League group stage was just a natural consequence: it occurred on September 2012. Starting from this season, he was also noticed by FIFA, and he was added as preselected referee for WC 2014. His palmares was surely not comparable to the ones of the other contenders, but for some reasons he had impressed the FIFA committee as well. Before being selected for WC 2014, he attended a FIFA tournament and he was also called to officiate a WC play off between Romania and Greece.

After a clear path before World Cup 2014, the Serbian was not at his best during the tournament in Brazil. He officiated only two games in group stage: Germany - Portugal and Argentina - Iran. He got many criticisms for both games, mostly for the latter, with the Iranian federation complaining against his officiating. He ended his tournament without a good luck. Did this call for WC come too early? We can't answer to this question with accuracy, but we can surely say it was not the best moment for the Serbian.

As regular Elite referee, in the following years he has gained further experience, reaching the Quarterfinals of Champions League in several occasions. The most important assignment for him, in this stage of the competition, was Madrid's derby, in 2014/15 season. In this game the Serbian got some criticisms for his officiating. He had never the occasion to make a further step, by officiating a CL semifinal, so he will be now directly in final.

In 2016 another major tournament followed, EURO 2016. He showed to be among the best referees of the competition, handling two group stage games and a Round of 16. He was very likely a candidate for the final, but he missed the call. Maybe, as reward for the good officiating in France, a few months later he was assigned as referee for 2016 UEFA Super Cup, between Real Madrid and Sevilla.

One year later, he attended another FIFA tournament, Confederations Cup in Russia, and he got the final between Chile and Germany. A few months later, November 2017, he was again in charge of a WC playoff, this time between Denmark and Republic of Ireland.

The rest is recent history: he has officiated 4 group stage games in this Champions League edition, without being appointed in KO stage. We can't know whether this was a strategy or something like that, but for sure his career talks definitely in favor of this assignment and it is fully deserved. For a country like Serbia, I think this is a more than big achievement as well.

Last referee from Serbia (former Yugoslavia) to officiate a final in this competition had been Milivoje Gugulović in 1973, when the final act of "European Cup" took place in Belgrade. More recently, Zoran Petrović had officiated the final of 1992/93 UEFA Cup in Amsterdam.
Posted by Chefren at 18:33