World Cup participation for the Saudi seems to be now in danger, following some news. We still wait for official confirmations, but we want to inform you about the main issue. 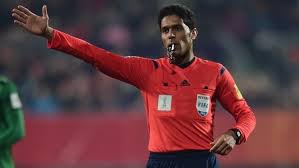 According to several sources, Fahad Al Mirdasi had been appointed as main referee for Saudi King's Cup Final. After that, he was removed and replaced by Mark Clattenburg. Saudi football federation has communicated that the referee is under investigation. For this reason, his participation to 2018 World Cup seems to be in danger.

Al Mirdasi, despite of his young age, has already a quite significant experience as FIFA referee in important tournaments. He officiated at 2015 FIFA Under 20 World Cup in New Zealand, culminating in the final appointment between Serbia and Brazil. One year later, he was called for Olympic tournament in Brazil. Then, one year ago he was in Russia for Confederations Cup.

He has been selected very likely as main referee for WC, along with Mohammed Al Abakry and Abdulah Al Shalwai as assistant referees from the same country in the same trio.

Without adding speculations, the only thing we can do is to wait for official statements by FIFA.
Posted by Chefren at 23:04