The UEFA Referees Committee has announced today that Gianluca Rocchi will referee the 2019 UEFA Europa League final between Chelsea and Arsenal at the Baku Olympic Stadium on Wednesday 29 May (kick-off at 23.00 local time/21.00CET). 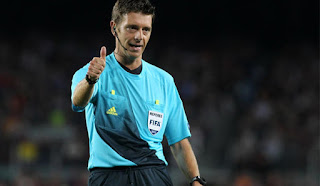 Rocchi has been an international referee since 2008. This season, the 45-year-old Italian has officiated at six UEFA Champions League matches. This will be the first UEFA Europa League final that Rocchi has overseen, after handling the fourth referee duties in the 2010 encounter between Atlético Madrid and Fulham, as well as the 2017 UEFA Europa League final between Ajax and Manchester United. The same year, he was in charge of the UEFA Super Cup match between Manchester United and Real Madrid.

He will be assisted by compatriots Filippo Meli and Lorenzo Manganelli at the final in Baku, with Daniele Orsato taking the role of fourth official. The video assistant referee team will be led by Massimiliano Irrati, supported by Marco Guida, Szymon Marciniak, and Pawel Sokolnicki.