Norway - Terje Hauge appoints himself as head of refereeing two months before he got the job?

A story reported by one of the most important Norwegian newspapers on its website: vg.no. 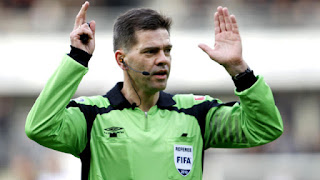 Nearly two months before he got the job, Terje Hauge wrote, on request, a 44 pages document describing referees and refereeing in Norway in a future perspective - with himself as the head of refereeing.

Initially, this looks like a straightforward common deliberation on the topic "Tasks for the association / Referees Sector". But the special thing about the document from October 28, 2014 is that the author Terje Hauge include as a proposal or a prerequisite: "Terje Hauge 100 percent position: Head of refereeing (role description)

Three days only after the 44-page note has been written - where Hauge already had put himself into the position of Head of refereeing - the job as head of refereeing is announced as vacant on the association web-pages.

Kjetil Siem, then the General Secretary of the Norwegian Football Association, told the norwegian newspaper VG that it was he who asked Hauge to write the document.

-  Yes, that is correct. I asked Terje, and two or three others, to write a document on how the refereees section in the association should be developed. The document is still used by the association, and is further developed as a strategy document, Siem says.

Hauge has appointed himself as "Head of refereeing" in his own document, before the position was announced, and a long time before he got the job. Was he promised the job?

- No, he wasn't. But Hauge was a natural candidate, with all his experience both as a referee and in various other association positions, Siem responds.

- Isn't it a little strange to put yourself in a job before it is advertised?

- It is not unnatural to ask people the question "what would you do" in various situations. So he suggested that he should have the position as Head of Refereeing. I don't see anything wrong in that, Siem replies.

Terje Hauge tells VG that Kjetil Siem contacted him and asked him to write a document on the development of referees in the association. It resulted in a 44 pages document.

- Yes, I can confirm that, by the then General Secretary, I was asked to share some thoughts on the development of the referees area at the time, says Terje Hauge to VG.

It must have taken some time - 44 pages?

- I worked as a referee and club developer in the Hordaland Football Region, I had done much of the same there. Half of the note was about association action plans and values, so it did not take me long to prepare the document. A major portion of the document was copied from material I had written before, Hauge answers.

You put yourself as Head of refereeing in the note. Why?

- My thoughts were requested, so I got into the role and wrote an internal document without thinking about consequences.

Were you promised the job when Rune Pedersen left the position?

- No, I was never promised the job, replies the current Head of refereeing Terje Hauge - who started the job after Rune Pedersen on January 12, 2015.

In the note, Rune Pedersen, the predecessor of Hauge, is listed as "referees consultant" in a 50 percent position. Pedersen never said yes to that job. VG has been in contact with Pedersen, who was Head of refereeing in the association for 10 years, but he refrained from commenting.

- I enjoy the job I have now. And have no other comments, says Rune Pedersen.

Kjartan Berland, who at the time was the chairman of the referees committee, also refrain from commenting.


Source:
https://www.vg.no/sport/fotball/i/2GjBBB/satte-seg-selv-opp-som-dommeransvarlig-to-maaneder-foer-han-fikk-jobben
Posted by Chefren at 14:32