Damir Skomina is our 2017 Referee of the Year

Slovenian UEFA Elite Damir Skomina has been elected as 2017 Referee of the Year by our blog's readers. 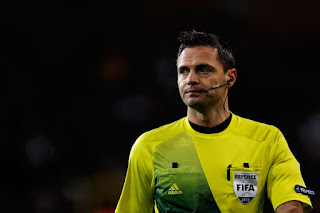 The 41 years old from Koper, Slovenia, who belongs to UEFA Elite Category, has obtained 174 points, becoming our best referee of the year.
Very likely 2017 has been the best year for him so far in his international career, in terms of performances and maybe also achievements. Starting from 2016/17 KO stage of both Champions and Europa League, he managed to ensure always very good performances: he officiated games like Real Madrid CF - SSC Napoli (CL Round of 16) and AS Monaco - Borussia Dortmund (CL Quarterfinals). A call for CL final was more than likely, but UEFA Referees Committee had different ideas. He was appointed as main referee for EL final in Solna, between Ajax and Manchester United. This was in any case another milestone in his international career.
After that, his participation in Confederations Cup was another very important experience. He got only one game in group stage (Cameroon - Chile), but he was surely a candidate for the final.
The year for him continued with strong performances in Champions League, at first in OGC Nice - SSC Napoli (play off) and then with three very remarkable games in group stage.
On November, differently from other UEFA top referees, he was not appointed for a WC playoff. Maybe this was just a choice of opportunity by FIFA and UEFA, however he was in the middle for very important games during the last matchdays of WC qualifiers. Then, an expected call for WC followed.
All in all, we can say that very likely in terms of achievements the Slovenian got less than what he really deserved, but his performances have been absolutely great, and that's in my opinion the reason of his success among our readers.

To follow as #2 on our ranking we have Milorad Mažić with 166 points. The Serbian had a very good year of officiating at top level with one major assignment: 2017 Confederations Cup final involving Chile and Germany. Good performances in UEFA matches were ensured as well. He was the only UEFA Elite referee officiating 4 CL Group Stage matches in 2017/18 beginning of the season. He got also a WC playoff, between Denmark and Republic of Ireland. Game ended 0-0 without significant issues. So we can definitely say that he deserved this remarkable achievement.

Our third placed is 2016/17 CL final referee Felix Brych, who got 156 points. In terms of performances, the German confirmed to be a very reliable and solid referee. In addition to CL final, he got a WC play off (Switzerland - Northern ireland) in which everything was kept under control. Furthermore, he was in the middle for a 2017 Club World Cup Semi Final.  We can remember that he was originally planned by FIFA to attend Under 20 World Cup in South Korea on May, but then he renounced to this tournament due to CL final's call. After that and for this reason, he was called again by FIFA as main referee for Club World Cup on December. Surely an excellent year for the German.

Outside UEFA, it is interesting to point out that Néstor Pitana from Argentina with 108 points has reached the fifth place in our ranking. He handled a WC intercontinental playoff and he officiated at 2017 Confederations Cup. In this tournament he got a group stage game and a semifinal, both were more than good performances. In terms of performances, maybe at moment he is the best CONMEBOL referee.

To follow, there are other 45 referees from different countries.

If we want to reason in terms of confederations these are the respectve "winners":

It is important to remember that this ranking has not the aim to be the best possible and the most reliable one, there are too many variables to be taken into account.

Thanks for your participation. We want to wish Merry Christmas and a Happy New Year to all our readers!
Posted by Law5TheRef at 15:59