FIFA to take over from IFAB in running of VAR Implementation

FIFA has taken over from IFAB in leading the implementation of the Video Assistant Refereeing project, effective as of 1st July 2020. 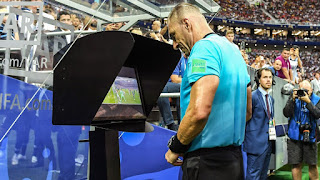 
"The IFAB’s role in VAR implementation is now over,  and we are pleased that FIFA, as of today [1st July 2020], will continue the important work of supporting all competition organisers with the implementation of VARs across the globe.


While The IFAB will continue to work closely with FIFA - especially in terms of the VAR protocol, related Laws and qualification requirements - we kindly ask you now to interact directly with FIFA and its VAR team."


So, what does this mean for refereeing en praxis? Chair of the FIFA Referees Committee, Pierluigi Collina, gave some indication of that in an interview with Reuters today.

"If something is written in the laws of the game, it has to be implemented everywhere; saying that VAR should be used in the same way all over the world is something obvious. Of course there can be some small differences, but the general implementation should be the same."

It remains to be seen how far FIFA will intervene in individual associations and confederations interpretations of "clear and obvious". One would imagine that would extend to procedural uniformity (On-Field Reviews for all subjective decisions in all competitions), and also that should include interpretational uniformity in objective situations (eg. goalkeeper remaining on the goal line during a penalty kick).

The big question is whether that will include more interpretational uniformity in subjective situations (penalties, red cards) at all, or to what extent.

In any case this marks a departure from IFAB's more laissez-faire leadership of Video Assistant Refereeing. In January of this year, IFAB Secretary Lukas Brud said "we are not the police", in dismissing the notion that IFAB would consider  suspending the VAR system in competitions who are not following the protocol.

Only time will tell how interventionist FIFA will become, if at all, in altering individual associations and confederations such as UEFA's, interpretation of clear and obvious, but Collina's interview today suggests that at least some of Roberto Rosetti's guidance to match officials for using VAR in European competition will have to change.
Posted by Mikael W at 17:34