Following this week’s UEFA Champions League matches, UEFA wishes to provide additional information and elements that were taken into consideration by the VAR and referees in reaching various decisions. 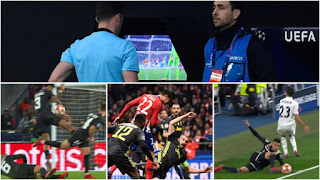 
There was no conclusive evidence that the ball would have been entirely out of play from all video angles and images that were carefully analysed by the VAR.

The assistant referee, who was perfectly positioned, had adjudged that the whole ball had not fully crossed the touchline. No on-field review was therefore required. Consequently, the referee was right not to intervene and to allow the goal.


The VAR, after checking the offside line - which confirmed the attacker to be onside - asked the referee if he had seen the holding offence committed by the AS Roma defender.

The referee confirmed he was unaware of any holding during live play and he asked for the images to be prepared to allow him to conduct an on-field review (serious missed incident). The review convinced the referee that a penalty kick should be awarded for a holding offence.

The referee was close to the action and had himself seen the potential incident in live play and judged that there was no foul.

The referee nevertheless decided to delay the restart of play, to give more time to the VAR to review the different camera angles available. A VAR check was conducted, and the various images were studied carefully by the VAR, who did not find any clear evidence.

The referee was then informed by the VAR that following the check no clear and obvious error had occurred and that there was no ground for a VAR intervention and an on-field review.

The VAR, after checking various different angles available to him, recommended to the referee an on-field review following the penalty area incident.

Given that the referee did not recognise the incident clearly during live play (referred to as serious missed incident in the VAR protocol) an on-field review was conducted.

Following the on-field review, the referee confirmed that the distance that the ball travelled was not short and the impact could therefore not be unexpected. The defender’s arm was not close to the body, which made the defender’s body bigger thus resulting in the ball being stopped from travelling in the direction of the goal. The referee, therefore, awarded a penalty kick.

All the above-mentioned decisions were made in full compliance with the VAR protocol.