The last contest of our "Referee of the Year", in cooperation with guesstheref.com, has ended. César Ramos from Mexico is, according to our readers, the best CONCACAF referee of 2018. 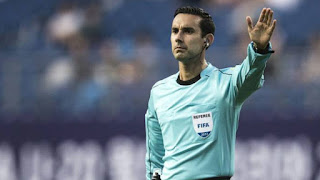 The Mexican has obtained 263 points. He has been selected for 2018 World Cup in Russia. In this competition he has handled two group stage games and a round of 16. His selection for the major tournament for national teams has been the best reward for his previous experiences in FIFA tournaments. Earlier in the end of 2017, he had indeed officiated 2017 Club World Final. Being still a relatively young referee (35 years old) he has for sure many years waiting for him as FIFA referee and very likely the best has still to come if everything will go in the right direction. That's what we wish to him. 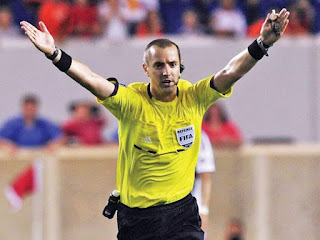 Second placed is Mark Geiger, very experienced FIFA referee from USA with 220 points. He has been selected for his second World Cup, after having appeared four years ago in Brazil. Similarly to 2014 WC, he has been appointed for three games, in this case two group stage matches and a round of 16. This was for sure something expected after the very positive impression he had made in Brazil. Maybe he could have reached more, but still something very good. In addition, he has been called as VAR for 2018 FIFA Club World Cup in UAE. Being already 44 years old, maybe he could retire soon, he can be very proud of what he achieved on recent seasons.

Jair Marrufo from USA is the third referee in this ranking with 213 points. His 2018 has been for sure a very particular year. We could say this was for him the year of "FIFA comeback". Indeed, the 41 years old from El Paso (Texas) was already monitored by FIFA before 2010 World Cup and he was a preselected referee for the tournament in South Africa. However, for some reasons, he didn't manage to make it and he was excluded. At the same time, his countryman Geiger became the first option for USA and Marrufo was out of the spotlights. Then, this year he has managed to make it and he has been called for 2018 World Cup in Russia. He got a game in group stage (Belgium - Tunisia) in which he showed an expected level performance. A few months later he has been again selected by FIFA for 2018 Club World Cup in UAE. After having been assigned to a second-round game, he has been appointed for the final, between Al Ain and Real Madrid. This has been for sure the most important moment in his international career, and, given the age, he could be still in contention for WC 2022 in Qatar.

Since this was the last contest, the competition is over and we want to thank all readers who have participated, with a special wish for a Merry Christmas and a Happy New Year.
Posted by Chefren at 12:01