The third contest of our "Referee of the Year", in cooperation with guesstheref.com, is over. Among the referees who made their debut in CL Group stage 2018-19,  Orel Grinfeeld from Israel has been elected by our readers as the best performer with 306 points. 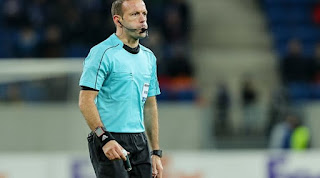 The Israeli has made his CL debut on 2 October 2018, officiating the game between AEK Athens and SL Benfica. Three weeks later he has been assigned to Real Madrid - Viktoria Plzeň. Without making a deep analysis of his performances, we can definitely say that his first match has been quite challenging with several crucial decisions to be taken. Very likely he has convinced the committee ana he has gained the trust. After that, he has officiated a very important game in Europa League on MD5, the "derby" between RB Salzburg and RB Leipzig. 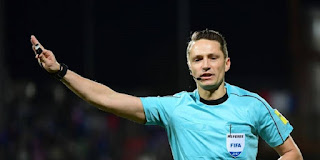 To follow, as runner up, we have Andris Treimanis from Latvia with 286 points. The young (1985 born) Category 1 referee has made his CL debut on 2 October 2018, by officiating Olympique Lyonnais - Shakhtar Donetsk. After three weeks, a second appointment has followed: he has been in the middle for Young Boys - Valencia. So for sure a similar path to Grinfeeld, with the chance of getting a third assignement on MD6 in the major competition. 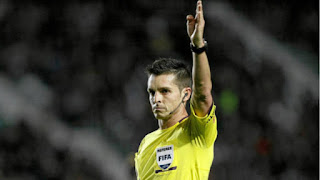 Third placed is Carlos del Cerro Grande, who is only one point below Treimanis (285). The Spanish has officiated two games like the aforementioned referees. His debut has occurred on MD1, 19 September 2018, in Ajax - AEK Athens. To follow, the Spanish has been assigned to Shakhtar Donetsk - Manchester City on MD3 (23 October 2018). Differently by most of the other referees, the rise of del Cerro Grande has been more than quick and impressive. Not so many years ago he was still a Category 2 referee, close to be 40 years old. Now he has for sure a chance to be promoted even in Elite.

Meanwhile, you can continue to send your preferences. Click here: REFEREE OF THE YEAR
The next contest is about best CAF referee in 2018.
Posted by Chefren at 13:13