Marciniak counts down the days to Tallinn assignment

Wednesday's UEFA Super Cup referee Szymon Marciniak admits that he wasn't the official's best friend when he was a player – and the Pole says a red card he received one day actually put him on the path to his current career. 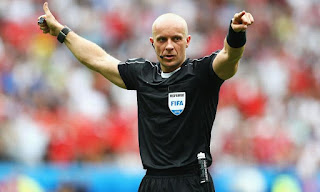 As a combative midfielder for Polish top-flight outfit Wisła Płock, Szymon Marciniak did not have the greatest respect for referees by his own admission – but a red card dealt out to him one day was to change his life and set him off on the route to the European and world refereeing elite.

"I wasn't the easiest player by any means," says the 37-year-old Polish match official, who is preparing for his latest major assignment – Wednesday's UEFA Super Cup encounter between Real Madrid and Atlético de Madrid in Tallinn. "I was ambitious, I wanted to win, and I used to make referees' lives very difficult. I complained all the time.

"But then in one match, the referee sent me off. I didn't agree with his decision, of course, and I let him know exactly what I thought. After the game, I told him that he was one of the worst referees that I had ever seen. He replied: 'If you think it's so easy, you try and do it.' So I did."

He enrolled on a refereeing course – and the rest is history. Marciniak and the referee went on to become great friends and colleagues. "We used to joke about how I was as a player, and when I became an international referee, he accompanied me as a fourth official at an Under-21 qualifying match. And I always told him that he had taken the right decision when he sent me off! It's a lovely story."

Since then, Marciniak has gone on to referee at the 2018 FIFA World Cup and UEFA EURO 2016, as well as in major European club matches. Last season, he was named as the fourth official for the UEFA Europa League final in Lyon, in which Atlético defeated Marseille. He was also the fourth official for the 2016 UEFA Super Cup in Trondheim, where Real Madrid overcame Sevilla. In 2015, he officiated at the UEFA European Under-21 Championship final between Sweden and Portugal.

Marciniak believes his experience as a player help him to manage players on the pitch. "Man-management is one of the most vital aspects of refereeing," he says. "It's important that you're able to establish a relationship with players. So if you've played, then you have an understanding of how players react to situations."

Marciniak is grateful to UEFA for the training he received in graduating from the UEFA Centre of Refereeing Excellence (CORE) programme in 2011 – the same year that he became an international referee. "I met some great people, and they taught me so much," he says of his time being primed for his future career. "I gained considerable knowledge that I've been able to put into practice along the way."

Five compatriots from Poland will join Marciniak for the Super Cup outing in Tallinn - assistant referees Paweł Sokolnicki and Tomasz Listkiewicz, additional assistant referees Paweł Raczkowski and Tomasz Musiał, and reserve official Radosław Siejka. Romania's Ovidiu Haţegan will serve as the fourth official. Marciniak says that the pre-match rituals will be no different to any other game.

"We'll have some music in the dressing-room – it especially helps to keep me calm – and we'll be ready, focused and concentrated. We'll also prepare for the match by studying the teams' tactics, as well as the players and their characteristics – it's become so important to know has much as you can about teams before you go out on the field."

Marciniak is determined to keep his feet on the ground and savour every moment of his career. "I try and stay the same person – you have to be yourself," he reflects. "To be given the chance to take charge of matches like the Super Cup is a reward for the hard work and sacrifices that you make to reach this level. I'm very proud."

And what of the future? "I take things one at a time," he explains. "You can't look too far ahead. I'm at a good refereeing age and I've now got a lot of experience which I hope will stand me in good stead in the years to come.

"As someone once told me: 'When you've reached a high level, the difficult part comes in staying there.' Now I'm counting down the days to the Super Cup – and after that, you then start thinking about the next match."
Posted by Chefren at 17:18