According to our readers who voted on guessthereferee.com, Cüneyt Çakır from Turkey is the best UEFA referee of 2018. He got 474 points. 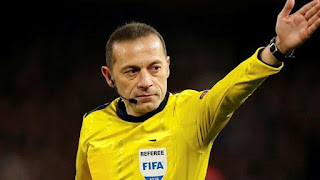 Cüneyt Çakır has been elected as Best UEFA Referee for 2018. The Turkish has confirmed himself at very high level in both UEFA and FIFA competitions, by also attending 2018 FIFA World Cup in Russia. He has started his 2018 with three very important CL KO stage assignments: a round of 16, a quarterfinal,  and a semifinal. Then, in Russia he has managed to officiate two group stage games and a semifinal, the latter between Croatia and England. His 2018 has continued with 3 CL group stage assignments in sonorous / decisive games. If we sum up all these games we have surely a very remarkable result. There were some matches in which he did certain mistakes but the experience and the trsut by committee in this referee is becoming surely something extra-ordinary. 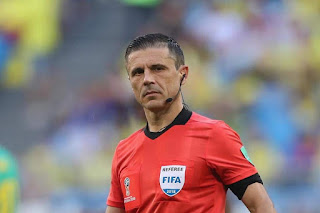 Only 3 points below, with 471 preferences, we have Milorad Mažić from Serbia. The Elite referee from Vrbas has officiated 2017-18 Champions League final and then he has attended 2018 World Cup in Russia. In this tournament, he has been appointed for two group stage games and then a quarterfinal, between Brazil and Belgium. Differently from other referees, regarding 2017-18 KO stage, he has been appointed only in Europa League (before getting CL final), but this was for sure a deliberate choice by Collina, who didn't want to put in trouble the Serbian before the last assignment. For this reason, in terms of officiated games, he is a step below the other contenders, but the performance in CL final has been surely good, at least expected level. He has crowned years and years of officiating at very high level. 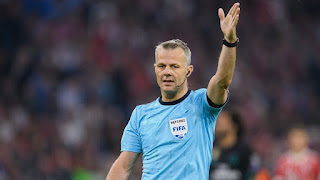 Third placed is Björn Kuipers from Netherlands with 436 points. The Dutch has officiated 2017-18 UEFA Europa League final, his second assignment for this game after the first one he got in 2013. This was very surprising and came absolutely unexpected, also because before this assignment he had been injured for some time during the KO stage, but one can't deny how much trust, experience and great skills has this referee and that's the reason for which committee trust him. In addition, he has also attended 2018 FIFA World Cup in which he has officiated two group stage games, a round of 16 and a quarterfinal. Very likely he has been also a valid option for the final, in which he has worked as fourth official. Excellent achievements in this 2018 for the Dutch, who can be absolutely proud.

Meanwhile, you can continue to send your preferences. Click here: REFEREE OF THE YEAR
Posted by Chefren at 13:32