A Bigger and Bigger Grey Area of Relativisation - A week in refereeing that points to a darker future (Law 5 View, 3/3)

In the final of our triadic Law 5 View series, we look at an incident from the recent DFL Super Cup in Germany, and reflect on the changing nature of big confederations refereeing ideology, which has been exemplified in the VAR era. 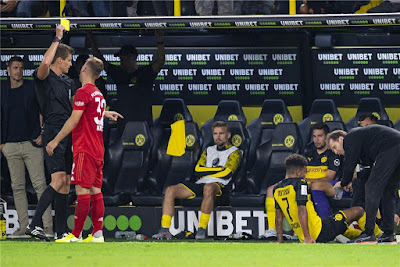 We should start with the aforementioned incident from Germany, you can find below in this game led by Daniel Siebert (UEFA First), VAR is Robert Schröder (non-FIFA).

In our opinion, this is a clear violent conduct offense - carting out your studs on to an opponent's shin with the ball nowhere, purposefully too, can only result in a red card. Apparently not... Siebert's caution was backed by the VAR, where seemingly there was no explanation for that. But yet, we were not even surprised.

While we disagree with the assessment that this was "not a big mistake", on this occasion we can only praise DFB for not only dictating that this scene should be solved with a Red Card, but that all stamps in such off-the-ball situations should be punished as Violent Conduct.

That a rare moment of absolutism in Germany, where we have seen endless cases of Serious Foul Play ignored by (video) match officials. We would be equally fascinated and worried to hear the reasoning of how this foul did not merit VAR intervention when only a yellow card was shown. Logically, we simply cannot understand how someone can reason that this is not a red card foul.


People may say that this is problem with VAR era, saying something like "there is no consistency" with the technology in operation. We couldn't disagree more. Video Assistant Refereeing is an excellent tool that can - and should - be used in order to achieve greater uniformity; logical reasoning should also support this. One can understand the person without bigger refereeing knowledge who draws the conclusion that VAR is bad from such situations; but in reality VAR has just showcased much better how different associations / confederations want different situations solved - a good case in point is the "new" interpretation of handling in last Champions League knockout season which shocked English media; VAR works like an in-game equivalent of a Referee Assistance Program if you will.


This leads me on to the biggest flaw in VAR protocol which has caused refereeing many problems, which is actually the most repeated phrase of the system - "clear and obvious". I can fully understand why this was conceived as the main principle of the project, and logically it is sound but it is fundamentally misunderstood. Just as √4=2 is clear and obvious, √75076=274 is also clear and obvious - but you can forgive the person that thinks otherwise. Best example is a 1cm offside, in the typical sense this is nothing clear and obvious, but of course goal must be disallowed for that, because that is a clear and obvious offside. Same principle should be used for all decisions computed by VAR, otherwise we close our eyes to logical coherency.

VAR faces the biggest problem when people ignore logical reasoning, and start to look for feelings such as trying to assimilate opinions and requiring a certain numerical value of people to see it as clear and obvious mistake, soundbites such as "what would football want?" or even worse, "no intervention is preferable because it's a final" - but we say it again, VAR just allows us to showcase how confederations want certain situations solved.

Perhaps you have the impression that the writer of this post is typical aloof absolutist in refereeing who believes that everything is either jet black or achromatic white, but I (Mikael) can assure you this is not the case. A constant and objective reality still allows for a grey area, be sure of that.

Of course I understand the referee who ignores a clear yellow card for a strong, effective verbal warning or the amateur referee who ignores a clear SFP gives just a yellow card that is the expected outcome by the players / audience because he fears for his safety - what is crucial though, is that referee involved acknowledges that the situation is yellow or red card respectively on the continuum; when we ignore this constant reality and head towards truth relativism is when refereeing is in the process of destroying itself.

Best example of this is our friends at the FIFA Refereeing Department, and their take on disciplinary control. What is very clear to all viewers - FIFA have instructed their referees to sort out as few cards as possible, and for us it is very clear that this directive has come from well above the department themselves.

Collina (2018) proved a much better card-cutter than Busacca (2014) - whereas the Swiss just tried to trim as many cards as possible in many areas leading to a total mess and many, many problems, Collina was more nuanced and targeted specific areas where cards could be reduced - he ordered that simulations where you would normally issue a caution, just strongly warn the player.

On dissent, such instructions were much more destructive for referees and robbed them of a valuable tool - one has to feel for Mark Geiger, a good referee (whose formula for success is great fitness and good use of cards), but sent in totally disarmed to the England - Colombia game it was not hard to guess what would happen.

Collina when at UEFA said "protect the players" - he forced his referees to brilliantly execute this mantra. He led the rejection of Busaccaism in 2014 as Chief Refereeing Officer, now he is one of it's advocates.
Since his job change, it would appear he had a change of heart too.

We have a nightmare of what could happen in FIFA refereeing, whose mentality by the way spread even to previously rigorous confederations such as AFC - a totally ad hoc approach to any decision in a match. Best example of this is would be a total absence of missed yellow card in the evaluation of the performance. Missed cautions might not even exist in the future, conceptually. That is very hard idea to grasp, as it should be, but it should also be a very concerning notion that would result in the destruction of refereeing.

Roberto Rosetti says that he has "reminded the referees of their duty (to protect players from reckless and serious foul play tackles as well as violent conducts"; it would appear that the reality is rather different.

We can already see that, the progression of permissive referees in every single confederation, self-evidently FIFA is working not only to use this style in the present, but to preserve it for the future as well and perhaps make such way of refereeing a constant reality at the top-level.

To draw us to a close, one might be wondering why all this relativisation is happening - answer is very simple.

Refereeing is used as a means to an end, confederations do not care about treating referees as humans who care about doing a satisfying job - it cannot and does not feel good to walk into the changing rooms having ignored many clear cards - but they are run like businesses. The message is clear and unequivocal, keep eleven players on the pitch at all costs, stay in the background if at all possible.

It seems that they succeeded in indoctrination too: apparently some people really convince themselves that truth realism, big picture refereeing, and progressive relativism is genuinely benefits refereeing - such ideologies should be viewed as nothing more than pseudo-intellectualism, those people do not seem to realise they are just propagating as big confederations want them to.

Such approaches destroy the referees themselves: it is hard to be satisfied with oneself by executing these instructions, you do not receive good matches unless you carry out these instructions; referees are stuck in a paradox of moral dilemma.

The future of refereeing points a dystopia where not even an objective reality of red cards, let alone yellow cards or fouls, exists and referees are just there to judge in each situation "what football wants" and officiate in a totally feeling-based and ad hoc way, with an all consuming grey area that makes evaluating any referee's performance totally superfluous.

Law 5 - The Referee blog hopes that confederations are fully aware they are complicit in a slow and painful disintegration of refereeing; each next relativisation is a further step closer to that dystopia.
Posted by Mikael W at 09:39