Dangerous Commercial Tokenism in UEFA Super Cup - A week in refereeing that points to a darker future (Law 5 View, 2/3)

In the second of our Law 5 View posts, we look at the surprising designation of Stéphanie Frappart to handle this year's UEFA Super Cup. 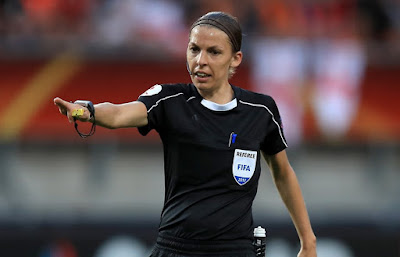 When predicting who would take charge of UEFA's annual Super Cup, it seemed it was not really a difficult task. Guessing appointments for UEFA's three major finals requires one to follow a general logical pattern that one follows to find a group of potential candidates; of UEFA Elite referees, you eliminate those from participating nations, those who already had the match (though UEFA were forced to break that last year), and those who's form wouldn't allow them to be a logical name for this game - then you have left a smaller group of referees from whom you can select.

It was the first condition where we all went wrong: despite never having handled a UEFA men's competition match before, it was Stéphanie Frappart who will handle the curtain-raiser for the European football season. Anybody who managed to guess that has a very special talent, or rather some inside information.


Law 5 - The Referee blog categorically disagrees with this appointment.

Firstly, it puts absolutely immense pressure on the French-Irish team, especially Frappart herself. While such occasions such as her Ligue 1 début game Amiens-Strasbourg, two host nation matches at EURO 2017 (opening game and semifinal) and recent Women's World Cup Final give her great experience of big matches - the pressure in Istanbul will be a whole new level, and of a whole different tone.

The course of women's international refereeing will have changed in the interceding period between Frappart's first and last. Media will scrutinise her not personally, but as the best and pioneering female referee in men's football. In the worst case scenario, UEFA will have needlessly ruined the career of a great referee - her first season in Ligue 1 will be extremely challenging if the whole world sees her mess up [sic] this match. Furthermore, how female referees will fare even long in the future could be determined by how this match goes. What a pretext for Frappart to officiate the biggest game of her life, besides all the typical pressure of handling a big final. But, something that is the key thread of this post, UEFA's appointment is not about Frappart.


Secondly, it manages to further erode away the performance principle. Any final appointment at any level should reward a referee for positive work at that level, this is also true in UEFA competition (names such as Danny Makkelie, Ovidiu Hațegan, Clément Turpin, Cüneyt Çakır and Antonio Mateu Lahoz would fall into such category for this upcoming Super Cup). Conceptually, unless using a table of value computed by observer's marks that is anyway more-or-less impossible for UEFA, the idea of the performance principle is subject to individual differences, relying on one's perception of good performance. 2019 has not been a good year for deserved appointments at an international level - I don't go into specific details about each one - but this is by far the biggest destruction of the good performances -> good matches notion

As touched upon, performance principle relies on an individualistic opinion of good performance. We'll give an example: Alioum Alioum's appointment to the AFCON Final. While we disagree with that designation, and his performance (unsurprisingly) bore that out, it would be possible to justify his appointment, if CAF deems his passive, permissive approach in handling matches to avoid trouble as good. At least, there is still a performance principle visible.

But Frappart's appointment is something else entirely - it even denies the existence of the performance principle itself, because there are no performances at all. It tells referees - it does not matter how you perform: you might still get a final, you might not - it would be impossible to know! For referees like the quintet above that is extremely demotivating.

But, again, UEFA did not appoint Frappart because they thought she deserved it.


Finally, we reject this appointment principally because it actually has nothing to do with refereeing. People who say this shows that gender does not matter in refereeing could not be more wrong: Frappart got this game because she is a woman. I read in the comments a comment that said, "this is nothing different than leftist ideology" - this is also fundamentally wrong.

Frappart's appointment is rather a pragmatic, business choice, this is even hinted at in the statement released on uefa.com when UEFA President Aleksander Čeferin says "I always said that women's football has no limits" - this appointment has nothing to with Frappart or with refereeing; UEFA want to increase the amount of revenue they can make from the lucrative and exponential market of women's football.

As was rightly said many times, why does it have to be a final, surely it is more logical that we start in CL / EL qualification like Nicole Petignat or any other referee did or even from the group stages. Indeed logical, but not as commercially valuable as the Super Cup for UEFA. In case of a good medial resonance - which has been maximised by the fact it's a Premier League duel - we can surely expect more "deserved" appointments in CL group stage.

At this point, we should say that Law 5 - The Referee does not hold any sexist viewpoints, there should absolutely be a place for women at the top-level of refereeing in men's football. In our opinion, such appointments as this are a step in a wrong, unmeritocratic direction that does more to harm women's refereeing. Stéphanie Frappart with this appointment becomes a fall guy for very powerful people.

We find it impossible to say that Roberto Rosetti himself ordered this appointment. Some might suggest he is a man without principles; we disagree. He does like all of us, have a family to provide for and surely still a passion to do the best for refereeing; that deserves our respect. A resignation in any case would likely be futile and not manage to change anything.

This appointment should be viewed as the latest step, of many, that undermines referees by using them not as humans but as a means to an ends, which is visible in all big confederations. Many different reasons for that, but the results are clear - such track is contributing to a slow, gradual destruction of refereeing; we are deeply convinced that Law 5 - The Referee has to speak out about such things and hold big confederations to account, in the perhaps utopian and unrealistic hope that our voice can make a difference.

Besides all that politics, we should not forget there is a trio of women who just want to officiate the biggest match of their lives well.

We would like to wish Stéphanie Frappart, Manuela Nicolosi and Michelle O'Neill well for the UEFA Super Cup 2019!

Tomorrow: a look at the latest relativisation regarding crucial decisions in Germany's Super Cup.
Posted by Mikael W at 08:14