An Unacceptable Resumption in Craiova - A week in refereeing that points to a darker future (Law 5 View, 1/3)

In this series of Law 5 View posts we want to retrospect the week just gone in more than an atomistic way, and offer our take on the direction that elite refereeing is heading is recent times - in our opinion, towards a darker future.

First, we focus on the events of the Universitatea Craiova - Budapest Honvéd game on Thursday. 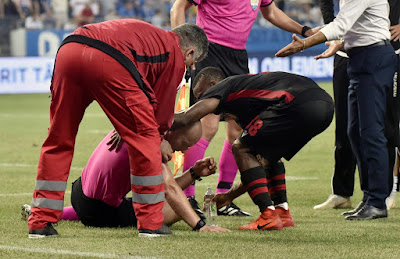 With UEFA's Elite and First Category referees away in Zagreb in their periodical pre-season meeting, the rest of Europe's international referees were appointed to handle the latest qualification matches on the road to the group stages of both Champions League and Europa League. Tuesday and Wednesday's matches passed without any bigger problems, but the Universitatea Craiova - Budapest Honvéd game ended with the referee walking down the tunnel unable to continue after having been struck by a projectile object thrown by a 'fan', and the team that had to be thrown out for that winning a penalty competition to advance.


Having watched the full game, we can report that the high-risk Romania-Hungary duel was very well-handled by UEFA Second Category referee Arnold Hunter from Northern Ireland (he clearly showed ability that would merit a second chance from the referees committee after having been demoted following a disastrous Olympiakós - RSC Anderlecht game in 2016 - but that is besides the purpose of this post).

In the 119th minute, Hunter was struck by a lighter that was thrown from the tribunes: distressingly, he fell to the ground hurt and was clearly distressed. If you wish, you can view a clip of what happened thanks to Amigos Del Arbitraje on youtube.

After many frantic minutes that made for uncomfortable viewing, UEFA Delegate Michael Appleby got the order to resume the game. In a moment that summed up the ridiculum of this diktat, Hunter had to show two yellow cards for unsporting behaviour whilst clearly not being in a fit state to do so, before fourth official non-FIFA CORE attendee James Robertson handled a ceremonial final minute of extra time that once elapsed resulted in a penalty competition.


Universitatea Craiova won - at this point they should have been already removed from the competition - thanks to three saved penalties that should have been ordered retaken after a big encroachment by the home-team goalkeeper; no faults for any officials, it was actually not possible for them to restart this game having seen their teammate in such a state and surely fearing for their own safeties - all blame for Romanian club unfairly advancing is at UEFA's door. Sure, we cannot know if abandoning the match would have triggered more safety problems - what I do know is that it was de facto impossible for the match officials to referee what remained fairly directly allowing Universitatea Craiova to progress - but even besides that, to condone such acts shows that it is possible to attack the referee and win, further risking referee's safety.

We can only summarise UEFA's approach as the show must go on - at any cost. Besides other absurdities such as the finished Benfica -  Olympiakós game in 2013, we are immediately reminded on both Montenegro - Russia and Sturm Graz - AEK Larnaca games where safety of players and match officials have been sacrificed in so order to (try and) complete matches. In Law 5 - The Referee blog's opinion this is an absolutely unacceptable track.

UEFA have again flouted their duties in protecting their referees, and have shown that safety of match officials and players ranks well below an effective business model in their priorities. Referees are just a cog in the machine or a means to an end, who are there to execute a function for them, and not more. Apparently, their safety does not really matter so long as we have a final result from the match.

Even more worryingly - just how high is the bar set in this relativisation of match termination before we actually can abandon a match? One can only hope that UEFA do not have a situation on their hands more-or-less resulting directly from this reckless approach that is really tragic...
We leave you with this alarming thought.

What should be most important though: we wish Arnold Hunter a successful recovery from such a cowardly attack, and hope that from a very distressing incident all of the referee team have the necessary psychological support made available to them from UEFA.

Tomorrow: a look at the designation of Stéphanie Frappart to handle this year's UEFA Super Cup.
Posted by Mikael W at 11:10