Björn Kuipers with his second EL final: another excellent achievement for the Dutch but a very poor signal for UEFA refereeing

Dutch Elite referee Björn Kuipers will officiate his second Europa League final, after the one in 2013. For sure, an excellent achievement for him, but at the same time there is for sure someting to be discussed about the rest... 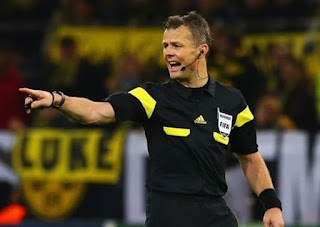 Differently from Champions League final, the appointment of UEFA Referees Committe for the last act of 2017-18 Europa League, has surprised us. Indeed, Kuipers will officiate his second final of this competition, after 5 years (the first one in 2013). The Dutch doesn't need a very detailed introduction: he is well known among the best and most reliable UEFA Elite officials of recent times.


Taking a look at his palmares, we see that he has already handled: 2006 EURO U17 final, 2009 EURO U21 final, 2011 UEFA Super Cup, 2013 Europa League final, 2013 FIFA Confederations Cup final, 2014 UEFA Champions League final, 2017 FIFA U20  WC final. So, the second EL final assignment will be overall the 8th final in his career. Therefore, differently from Mažić, comparing the career of both referees, we can notice that for the Dutch this will be just another "normal" step, but he had already reached this achievement a few time ago. The interesting thing to note is that he can reach even more by being a candidate for WC final on next month. In that case, his palmares would become for sure incredible, and, honestly speaking, impossible to emulate for all the other Elite referees.


What are the reasons of this choice by committee? We can try to answer in the next paragraphs. First thing to remember is that Kuipers had a quite significant injury immediately after the UEFA Winter Course at the end of January. For this reason, he was forced to skip games in domestic league for more than a month, being back only on March. This made impossible for committee to appoint him for any Champions League / Europa League game in the first part of KO stage. His absence lasted until 12 April 2018, in that occasion he was back in Europa League with a quarterfinal. Later on, he got a Champions League semifinal, the top clash involving Bayern and Real. This was of course a signal of big trust by committee, despite he was back from a period of inactivity. After this game, maybe he himself thought that his European season was over, but the appointment for EL final followed. One could easily guess that Kuipers was quite surprised as well, as it was never happened (at least in recent years, with Collina's management) to nominate the same referee for the same final.

In our opinion, Kuipers was not a considered name for the final, this should be more than clear. Rather, Szymon Marciniak from Poland, who will be fourth official with the Dutch, is the first name coming in our mind as refeere maybe planned for EL final. Of course after the performance in London (Tottenham - Juventus) he ruled himself out. This was very likely the first bad signal for the committee, starting from that date, there were some troubles and maybe the lack of options increased. Other Elite referees did significant and / or crucial mistakes in their games. We can take Çakır as example. The Turkish for sure could have been more candidate than the Dutch for EL final, because he had never officiated it.

However, we must also report that many referees who could have handled this game were not in the condition to be appointed due to the nationalty of the teams involved: Turpin was for sure possible, but unluckily for him, Marseille qualified. Spanish referees were out as well, due to Atlético's presence. Of course, everything about this argument is not committee's fault, but for sure what we can say is that there was en evident lack of options. In a way you must always ensure to have an appropriate alternative when something unexpected happens. Maybe, this time, for Collina and the committee, too many unexpected facts have happened.

The last consideration is the following: this should stay  as "extra-ordinary" case. We must wish, for the good reputation and honor of UEFA Elite refereeing, that valid and multiple options for a final should always exist. Otherwise, if somebody talks about a technical failure, maybe he is not that wrong. This speech is of course merely against the lack of options, and not against the appointment of Kuipers, we hope that this very important point of our analysis is clear.

The last referee handling twice or even thrice Europa League (former UEFA Cup) final had been Spanish Antonio López Nieto in 1995 (first leg), 1998 and 2000.
Posted by Chefren at 16:46

New comments are not allowed.