The 43 y.o. from Corpus, Argentina, has been appointed as referee fow WC final. 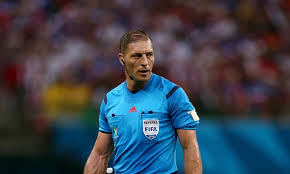 Having started the tournament as favorite for whistling the final, Pitana has confirmed the expectations, by showing always very good performances, especially in terms of players management. He will get the final as fifth match in this tournament. After Horacio Elizondo's appointment in 2006, Argentinian refeereing can be proud again by reaching the top level with another referee.

He will be assisted by his countrymen Hernan Maidana and Juan Pablo Belatti. Kuipers from the Netherlands will work as fourth official, while Erwin E. J. Zeinstra from the same country of the latter as fifth official. We wish the officiating crew good luck.

Alireza Faghani from Iran will be in charge of Thid Place final.
More to follow.