After Fahad Al Mirdasi facts, another issue seems to have happened, about one of the officials selected for WC. Kenyan assistant referee Marwa Range is under focus this time. 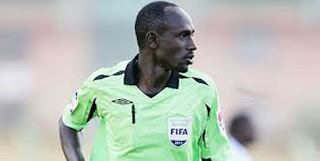 According to some sources, but still without an official statement by FIFA,  the assistant referee from Kenya, appointed as AR2 in Gassama's trio,  has been implicated in a bribery scandal in which he was filmed receiving money. We will follow this vicissitude, giving you the updates, when available. The source also reports that assistant  referee has been removed from WC officials.
FIFA has removed the name of the assistant referee from the official PDF:
FIFA.COM

Source:
Kenyans.co.ke
Posted by Chefren at 11:08